On a Different Note 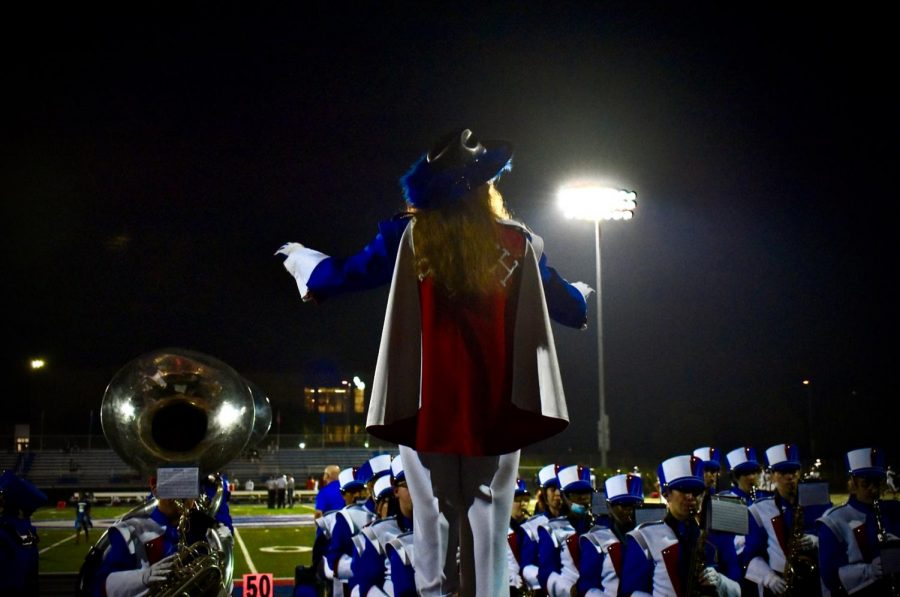 Have you ever passed a student in the hallway who was complaining about a song stuck in their head or was whistling or humming a random tune that you’ve vaguely heard around school? That is most likely a music student who just came out of class after rehearsing all of their music back to back, they could be a part of Band, Orchestra, choir, or a combination of these music communities. This article mainly focuses on Band and an ‘inside scoop’ from the Drum Majors and Band Director about what Band means to the students and staff and who lead it.

About the Drum Majors

The Glenbard South marching band has three drum majors this year: seniors Emma Sampey and Megan Miskovic as the lead drum majors and junior Jonah Keating as the assistant drum major. Being a Drum Major is a large undertaking since the whole band depends on them to keep each and every section on beat; during a show if the audience is not looking at the band they most definitely are looking at the drum majors. Before they could officially take their positions as drum majors, Sampey, Miskovic and Keating had to attend a summer camp for drum majors.

According to Sampey, “The summer camp was really cool! We went to the Smith Walbridge Clinic, and we learned how to march with signal batons, as well as how to conduct and to be a drum major. It was really fun, and the staff were so supportive. One of the highlights for me was winning the most improved drum major, which meant a lot because I had never even tried to march with a signal baton before.”

As a senior, Emma Sampey has been a part of band throughout all four years at Glenbard South and plays various instruments throughout the different ‘seasons’ of the band. In an interview with Emma Sampey about her experiences in band as a Drum major and a student she said “I used to march with a tenor saxophone, and being in the saxophone section is amazing. I still play tenor sax in jazz band, but during marching band I love to conduct. It’s a whole different experience and conducting with Megan and Jonah has been amazing.”

So what exactly does a Drum Major do and what do they think when they step onto the podium? “It should be nerve wracking. However, when you get up on the podium all of the nerves go away and after each performance, you just want to do it again. Some important jobs that we have to do is help set up band camp, like creating the music folders, we welcome the freshmen and this year we ran the freshman training camp, and then after games we also clean up everything. We conduct the band and yell out commands so everyone knows what’s going on.” replied Sampey.

When asked the same question, Miskovic responded with “Primarily, conducting and leading the band. There’s a lot of moving people to and from fields, corralling them into lines and rows, but I wouldn’t trade it for the world.”  Miskovic also mentioned the difference between marching band last year, in regards to the effects of last year’s strict COVID regulations, and this year with fairly flexible regulations in regards to the effects of, “Last year, the majority of it was just supporting the band, conducting and setting up the field. This year had more normal activities which required more hands-on work. The band did not march last year, so adding that back in this year meant a lot more repetition and longer hours of practice to perfect the drills.”

Being a drum major means knowing the music inside and out, but also not getting to play your instruments as much. However the drum majors don’t see marching band as missing out on playing instruments, rather they see it as a trade. “I play different instruments in marching and concert season (flute and bassoon respectively) so it’s not too different from what I would be doing if I was not a drum major. And of course I can always practice if I miss the instrument too much. I’ve found that I really love conducting, so I’m happy to replace one type of music with another,” concluded Miskovic with a positive perspective.

As marching season comes to an end and the band starts to prepare for concert season, are the drum majors excited to be able to play instruments again? “Of course! I’m so excited to play bassoon, my main instrument, in a group again. It’s been over a year and Megan and I get to play bassoon together!”  exclaimed Sampey.

“I’m most excited for the beautiful songs that dance with dynamics, since we don’t get to do anything stylistic during the marching season” confirmed Megan.

About the Band Director

This year Glenbard South brought back one of its former students, James Wallace, back as the band director after the retirement of Dr Dewald, the previous band director. In an interview with Wallace, he said“It has been a bit surreal to be back at South 23 years after I graduated, and I feel honored to be able to work every day in the exact classroom where I fell in love with making music as a teenager. The school is an interesting mixture of things that are new and things that are just the way I remember. The Band Room, for example, is almost exactly as it was back in the 90’s…just with a different color of carpet. Other things are vast improvements, like the beautiful auditorium and windows in the library. It all still feels very much like home, and I am so pleased to be back!”

When returning to Glenbard South a few different thoughts crossed Wallace’s mind. “First, I looked forward to meeting all of the students and families of the Glenbard South community. It is hard to explain, but I see so much of myself and my own upbringing in so many of my students here. It makes for an easy and natural connection. Also, I looked forward to continuing the great tradition of music making that Glenbard South has experienced throughout its history. The school and community have always supported the arts in a major way, and South has been blessed with a line of amazing and inspirational Band Directors. I enjoy the challenge of working hard every single day to maintain that tradition of excellence” said Wallace.

According to him, “music is an essential component of human culture, and engaging in music making stands alone as a valuable artistic pursuit. Still, there are some amazing additional benefits from participating in a music ensemble like Band. These include learning to work collaboratively as part of a team, applying focus and discipline to your work, mapping out long-term plans for growth, and punctuality.” And on a personal level, “the music touches every single part of my emotions and soul, it is special that way.”

As a teacher Wallace hopes that “every student who comes through our Band program gains a lifelong appreciation for music, and that they will at least be appreciative of the artistic value of music and have gained a deeper understanding about the music they consume every day.”

If a student were to look up “what is a band” on google, the answer they would receive is “A musical ensemble, a group of people who perform instrumental or vocal music, with the ensemble typically known by a distinct name.” However, band is much more than ‘a group who plays music together’. It can be a “big family for our students,” said Wallace, and most music students and teachers would agree with that statement.

When asked for an opinion about Glenbard South’s band or its music program in general, the response from parents and teachers will almost always be positive.

In band, students must keep up with class work while also practicing for auditions, ensembles, and solos, preparing for concerts, and encouraging school spirit at games throughout the year. Whether it be directly or indirectly, almost all students are impacted by the band, may it be at the halftime show at games, at concerts, or when students hear the drumline playing up and down the hallway before homecoming. 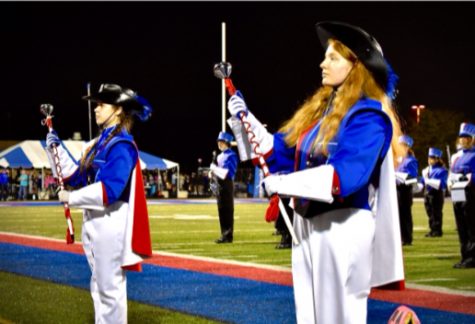 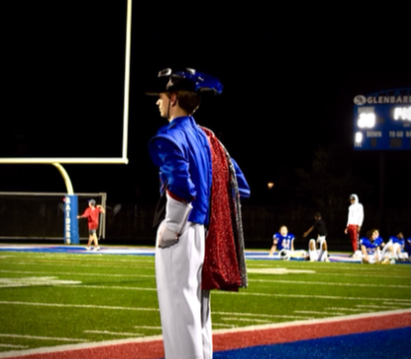 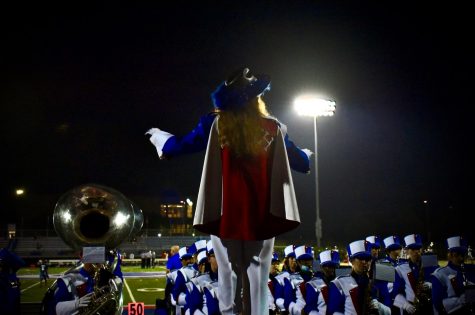 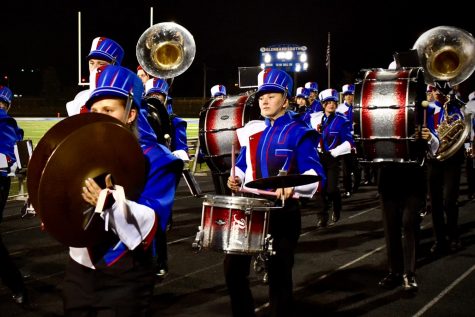 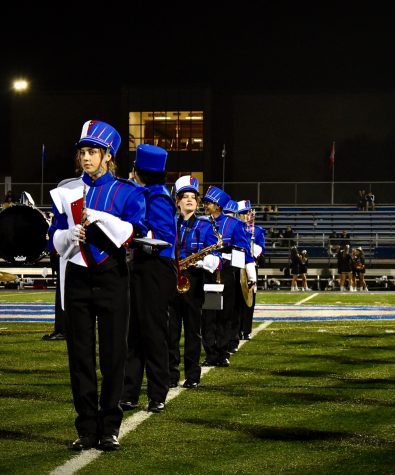