The Jury’s Still Out on “The Crucible” 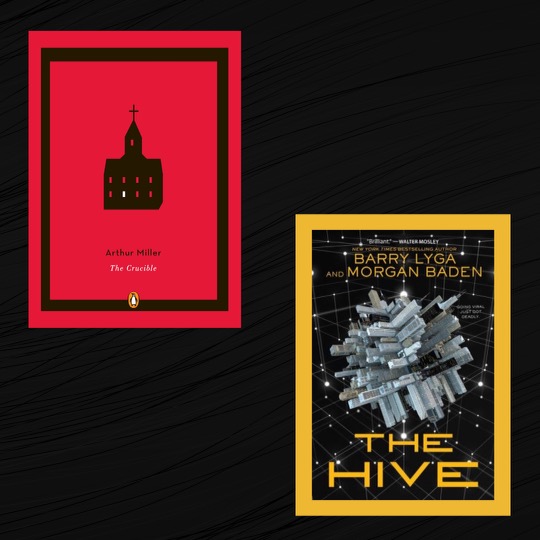 A new school year brings a new questionable array of irrelevant reading choices for English students. In my opinion, The Crucible by Arthur Miller is one of those choices.

Many of the ‘classics’ that are taught year after year have good reasons to be classics, since they contain important themes that can be applied to life outside of school. However, as modern literature has progressed, there are newer novels that preach the same theme, but are easier for students to understand and relate to, all the while being more inclusive. Specifically, in terms of the classic text, The Crucible, The Hive by Barry Lyga and Morgan Baden would be a much better reading option for instruction. The Hive maintains the significance that The Crucible holds, warning against the mob mentality, while providing a much more interesting plot and more relatable characters which also do not contain racist and sexist slurs.

The Hive is a story set in a near future United States, where the judicial system is based off of social media. When someone posts something, people have the option to either like it or condemn it. If a post gets too many condemns, the algorithm of the app categories and determines the punishment for the person. The higher the category a person is in, the worse the punishment that the “Hive Mob” gives you. The Hive Mob is a chaotic collection of people in the area of the persecuted who carry out the punishments. The story follows the main character who after posting something, negatively trends and quickly moves through the punishment categories. Just then she was able to see how flawed and easily manipulated the system was. The Hive

explains the downsides of group thinking and flawed judicial systems based off of accusations just as well, maybe even better, than The Crucible. With a more recent and contemporary setting, the overall theme of The Hive was clearer and its impact was then amplified.

While The Crucible is most definitely one of the better of the  assigned novels taught in school, it falls short of The Hive and other similar books. The Crucible is outdated and needs to be replaced. The old setting, language and character interactions make the plot extremely boring for modern audiences. This dryness just adds to the dislike of reading found in younger audiences. The Crucible is not only bland, but several scenes are not what are considered socially acceptable in today’s day and age. Several derogatory terms were used throughout the story that may make students uncomfortable to hear and to read.

It is important to keep in mind that The Crucible is not the only irrelevant ‘classic’ and all literature used for instruction should be reevaluated in comparison to modern literature. The Crucible should be removed from the curriculum of the English classes because of its outdated plot and offensive language and replaced with more exciting and interesting stories such as The Hive.