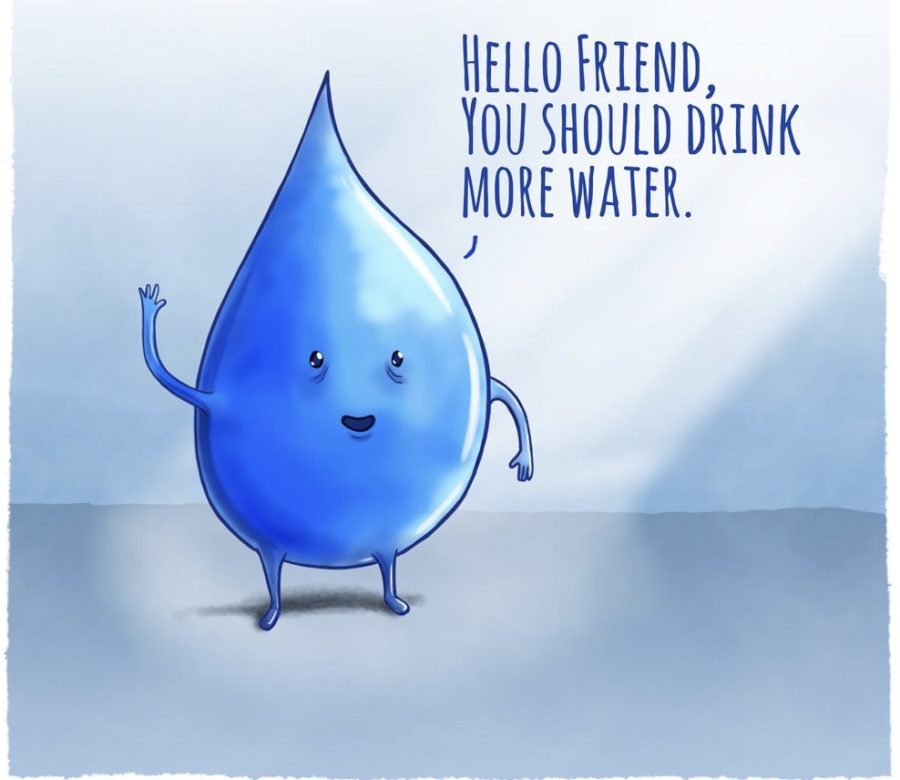 “Drink more water” is probably one of the most commonly heard phrases. Trees, humans and animals—all living things—must have water for survival whether they get it from a rain cloud, a water bottle or a river. Even though everyone has heard somewhere that hydration is key for crucial health, about 75% of Americans today are still in a state of chronic dehydration. Without water, the body stops functioning properly; therefore, a person cannot go more than a few days without it. Why is water so important, and what can one do to receive an adequate amount?

According to University Health News, water actually makes up 60% of the body’s weight. Regardless, it still needs water as it is vital for the functioning of organs and transporting nutrients or waste products. It can also improve blood circulation and regulate body temperature. Without enough water, the body soaks up fluids from the blood, which can result in shrinking of the cells, like a grape shriveling into a raisin. Staying hydrated is essential not only for bodily functions, but it also helps one stay healthy. 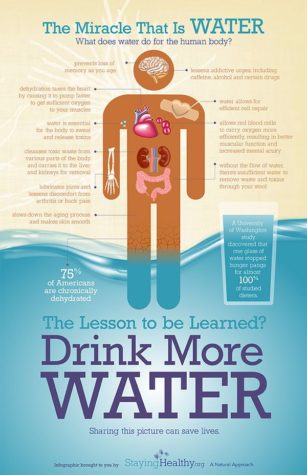 First, drinking enough water ameliorates physical performances. During physical activities, the body works hard and loses water via sweat. In fact, even losing as little as 2% of the body’s water content can have a noticeable effect. Even if one is not an athlete, hydration can prevent injuries that might occur as well as reduce fatigue and maximum heart rate. Since the muscle is approximately 80% water, Healthline says that optimal hydration may decrease the oxidative stress since water aids the cells in muscles and lubricates joints. Increased water intake also helps prevent various health problems. For example, water deprivation often results in constipation. Lack of fluid in the body causes the large intestine to soak up moisture from the food waste, resulting in a hard stool. Acne is also another common issue that many come across. This can easily be prevented with proper hydration as the kidneys need water to cleanse toxins from the body.

Believe it or not, drinking a glass of water can also boost one’s mood. According to Mindful Living Network, water has a significant role in alleviating depression as it makes the mind and body “feel better.” In fact, the University of Connecticut’s study shows the negative effects of dehydration as subjects were cranky and fatigued when not given enough water.

More water also means better brain performances. A study from Health & Fitness reports that individuals who drink water during cognitive tasks have more competent performances compared to those who do not. This is because, according to Psychology Today, the brain depends on proper hydration to function optimally. Brain cells require a balance between water and other elements to operate, but a dearth of water causes those cells to lose efficiency. Additionally, research shows that humans lose the ability to focus when they are thirsty. That is why professionals recommend that students take big gulps of water before any big exams.

So, how much water does one need? That depends. Age, gender, activity level and other factors need to be taken into account in order to determine the right amount. Although, Healthline generally recommends the “8×8 rule”—eight eight-ounce glasses, or two liters.

A student at Glenbard South reports that she has been trying to drink more water by bringing along a water bottle. Although, student athletes are more likely to have a water bottle on hand.

What can one do to make drinking water less of a chore? Experts suggest that one sips water immediately after waking up. Doing this daily can establish a habit to make one drink more water automatically. There are also apps, like Daily Water, that helps an individual keep track of the number of glasses he or she drinks per day. Other food products are loaded with water. Melons, fish, eggs and other fruits or vegetables contain significant amounts of fluid that can be beneficial to the body. However, nothing beats the benefits that a glass of pure water can offer. If plain water is not appealing, consider adding fruit slices to the water to add some flavor. 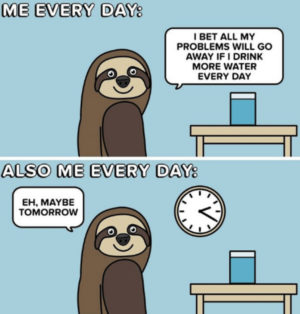