New Technology Comin’ Your Way in 2019 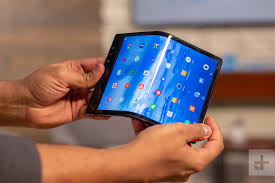 It is 2019, and the technology industry is bigger and better than ever. As the industry continues to grow, more and more inventions and gadgets are constantly coming out. Curious about what is in store for 2019? Look no further.

LG’s New TV Rolls Away When Not In Use

This 65” television has the ability to roll into a piece of furniture when it is not being used. In my house, the television is literally always on so it would never go away, but hey, I am sure other households would enjoy it.

Smaller than a credit card, this interactive projection module uses a laser to make any surface a touch screen. The module is not meant for direct consumer purchase but to be integrated into consumer products. With applications that range from “smart shelves” to providing a secondary virtual touch screen for industrial applications, the possibilities seem endless.

Apple’s New Over The Ear Headphones

Forget about Airpods, Apple’s new patent describes headphones that would eliminate the need to check that you are putting on your headphones correctly because they automatically adjust themselves. They purportedly will also  better isolate your voice when making calls in noisy environments. Apple chose the name “Over the Ear” to describe them because they fit so well that they do not just hang from your head, but rather form a close fit from ear to ear.

The company has announced the release of a new smartphone that will feature two different screens. One screen will function as a normal smartphone, but when the phone is opened up, it will show both screens and it will be twice the size. I used to have a foldable phone. It was a Motorolla!

2019 is certainly in store for many technological breakthroughs. As the industry expands further, it is harder to keep up. Make sure you are not missing out!