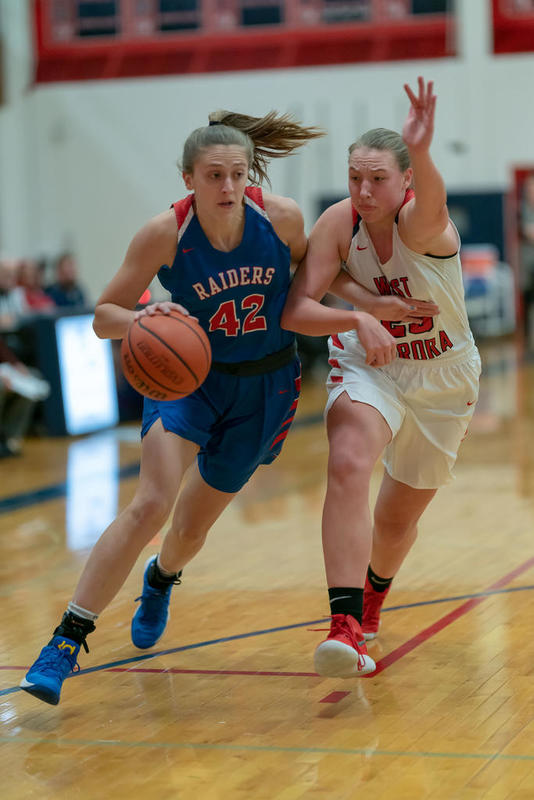 When someone hears the name “Maggie Bair” around Glenbard South, the first thought that comes to mind is championship player. Being a four year varsity player for the girls basketball team here at south, Bair has experience at almost every level of high school competition , from conference championships to holiday tournaments, and winning at every level of the state playoffs multiple times. There are many factors that helped drive the athlete that Maggie is today, some of them being the push and athletic talents of her family and her exceptional success at both of her other sports.
Her constant success comes to no surprise of her two brothers, Billy and Charlie, both basketball players who know what it is like to bring home the hardware for basketball. Each brother walked away with at least one regional championship and went on to play sports into college. Also, her family’s athletic abilities had an influence on Bair’s life.
Starting out her freshman year strong the Raiders were able to bring home a regional championship and make it to the sectional finals, thus starting a long line of Bair’s different wins.

Going into her sophomore year, the team had a similar season bringing home another regional win but again falling short in sectionals. She was also able to advance to the state finals for 3 point shooting where she not only won the 3A class shootout, but also brought home the Queen of the Hill title, meaning she beat the three other winners of the other classes. Bair’s junior year is where her career started to take off. Starting on a team made up mostly of seniors came to no surprise as she and her senior teammates led the team all the way to a third place finish at state finals. Coming into her senior season with the bar raised high because of last year’s success, Bair knew that this was finally her chance to lead the very young team to victory. Joining the Upstate 8 was a real challenge for Bair and the Raiders as they had not really faced this kind of completion before. But just like in the past, however, the team took the challenge head on and proved they could hold their own in this very big conference.

Bair finished the season with over 300 points, averaging 15.8 per game; she also reached her 11th double double of the season in just the middle of January. This year, Maggie also became the career leader at a South in both rebounding (1,131) and scoring (1,395). Also, she again qualified for another trip to state in the 3 point contest.
When asked about her favorite season here at South, Bair has trouble picking out of four very successful seasons, going on to say “I think every team I’ve played on at GBS has been unforgettable. Every year I’ve been fortunate enough to play with the best teammates and friends I could’ve asked for. I really can’t pick a year that’s been better that the others because every year has just been amazing.”

Bair was then quick to give credit to the people who she believed helped get her hear the most, “I’ve been fortunate enough to play with some great people in school and on my travel team. I’ve had some incredible coaches, Coach K (and) Coach Gross have become more than just coaches to me.  My parents and brothers have always pushed me to become the best I can be. Everyone I’ve ever played with- my friends, and family have all gotten me to where I am today”
Bair has decided to go on to continue her basketball career at the Division I school, Drake University. “I visited and loved the small school feel. The team has been very successful and the coaches and players instantly felt like family.”
Just recently, she brought home another super sectional victory this season, beating St. Viator 34-24 and earning her team another trip to the state finals with the hope of possibly bringing home the first place trophy.