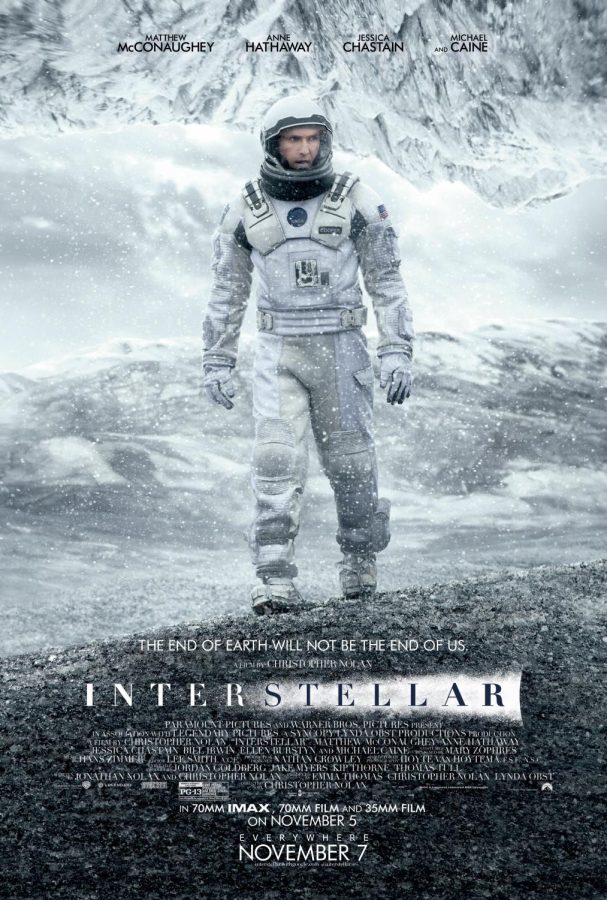 Christopher Nolan is well known for his incredible, award winning films such as The Dark Night, Inception and Dunkirk. One audience favorite is his 2014 Interstellar.

Set within the far future on Earth, the planet is quickly reaching a state of inhabitability due to severe dust storms and lack of natural resources. The main character, Joseph Cooper, is an ex NASA pilot who currently works on a farm to provide food for people. One day his daughter, Murph, claims that there is a ghost in her room, who has been pushing books off of her shelves and creating patterns with dust. Through the ‘ghost’, Cooper accidentally discovers the coordinates to a secret NASA base using binary code. There, he is brought into a mission focused on finding a new planet inhabitable for humans by traveling far into the universe using a wormhole. Unsure if the mission will succeed, or if he will ever return, the movie follows Cooper and his journey throughout the universe.

Interstellar keeps the audience engaged throughout the whole movie with every twist and turn the story takes. Perfect for any science fiction fanatic, the film explores a beautiful story of space travel while covering themes of family and loss. The intricate plot line reels viewers in and leaves them demanding a rewatch. Though sometimes a bit confusing, the story is unforgettable and with every viewing, the audience can spot more plot pieces not noticed during the original watch.

The score was composed by Hans Zimmer and it creates another level of intensity within the film. The notable piece, “Cornfield Chase” is a memorial melody that encompasses the tone of curiosity through the film.

Overall, the film is a perfect watch for any space fan, or anyone who wants to enjoy a beautifully produced Christopher Nolan film.

Interstellar can be found on Hulu with a premium subscription.